Abbreviations can have their disadvantages and advantages, one can misunderstand the content and it can create confusion. Nevertheless, abbreviations can be simplistic and time-saving. In this article, we will consider the abbreviations PIR and PUR used in the construction industry and what is the difference between these.

PUR is the abbreviation for Polyurethane

This material has different properties, and is available in, for example, foam, plastic or elastomer. It is most often compared to rubber, due to its elasticity. PUR has a longer service life and it has a higher temperature resistance on rubber. In the construction industry, PUR is mainly known as expanded polyurethane and is mostly used for thermal insulation.

PIR - the "improved version" of PUR

According to Wikipedia, PIR is "... the abbreviation for polyisocyanurate is also produced based on the same starting materials similar to those used in polyurethane (PUR)." PIR (polyisocyanurate) is mainly produced as foam and is used in the form of rigid foam boards as a strong material for thermal insulation of buildings. PIR is the "improved version" of PUR. It has even higher insulation value and excellent performance when it comes to fire safety.

An important rule is to remember: The lower the λ value, the less heat loss and thus more efficient thermal insulation

Thermal conductivity of PIR turns out to be one of the lowest among classic insulation materials. This also means that PIR provides improved insulation with the same thickness. In other words, the insulation layer is thinner and more efficient, which frees up space during installation.

Fire properties of PIR and PUR

PIR insulation boards are self-extinguishing, but flammable at high ambient temperatures, e.g. due to heat build-up, as happened in the fire at Grenfell Tower. However, fire safety is higher than with PUR insulation boards, because when the PUR material is burned, large amounts of highly toxic gases (hydrocyanic acid) are emitted. 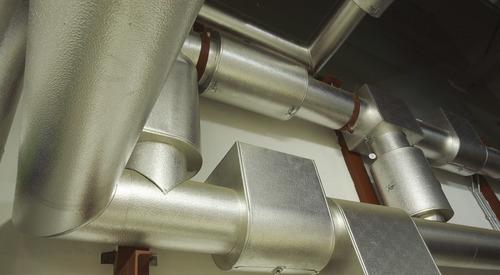 Typical products for the LNG, Petrochemical and process industries

Due to the properties, a typical application is LNG plant and in the process industry. Such products must generally withstand very low temperatures, the thermal conductivity must be as low as possible and the fire properties are very important.

One of the suppliers to Isopartner on PIR pipe trays for industrial applications «Tarecpir» is Kingspan.

The Tarecpir range of CFC / HCFC-free rigid polyisocyanurate (PIR) insulation is suitable for a wide range of industrial applications, such as process, petrochemical and LNG. Although Tarecpir retains all the benefits of rigid polyurethane insulation, it has a significantly increased resistance to burning and flame spread.